So, like I’ve mentioned in my last post, I have a pretty cool Anthropology degree. Cool as in I’ll be searching for a job for the rest of my life…I saw a painfully accurate quote online once, “If you do what you love, you’ll never work a day in your life…because they’re not hiring.” Truer words have never been spoken. I want that perfect job, one that I’m totally in love with and is super interesting and fun and makes people curious about what I’m up to. Is that too much to ask?!?

I decided I wanted to go to archaeology school anyway. Give it a try, see if it opened doors or if I fell in love with it. I spoke with my past professor/life coach Dr. Payson Sheets (he’s a freaking baller. He discovered the site Ceren in El Salvador…google it, it’s awesome. There’s even a vodka named after it, most importantly). He gave me advice on which archeology schools to apply to and what my next move would be.

I applied to a school in Menorca, one of the Balearic Islands off the coast of Spain. It was mortuary archaeology which sounded SUPER rad. The school is excavating graves of Roman soldiers who had a military base there in antiquity. Yep. I’ll dig up some dead people!

The three weeks started off kind of rough, I drug my mom along with me to Barcelona a few days before I left for Menorca. That whole story will be saved for a later date (it’s a doozie). I wasn’t super comfortable in Barcelona (even though my wonderful mama did all she could to make me feel better 🙂 ). I was mostly a bit nervous to be by myself with a band of strangers on a foreign island for 3 weeks. I’m a pretty outgoing person, but not having a security blanket was kind of intimidating. Also, what I was about to do is basically going to determine what huge move I make next in my life. I was both excited but terrified that I was going to hate archaeology. In hindsight, I probably shouldn’t have even put that negative idea in my head. But, alas, there it was.

Anyway, I show up to the cute little island of Menorca (it takes an hour to drive across it) and it is simply charming. The sleeping situation was dorm-like but I didn’t mind. It was kind of fun to have that dormitory camaraderie once again. Not to mention, THE SANGRIA. We drank it all. I’m pretty sure the island was dry when I left.

The island was incredibly European with cobblestone streets and colorful buildings. A popular vacation destination for Europeans, in the summer the water is so clear it looks as if boats are hovering above the sea floor. Unfortunately, I did not get to see such a sight. But I had some pretty good Italian food (strange, yes) and AMAZING gelato (same caliber as the gelato in Vienna) and did I already mention the sangria? Oh yes, the sangria was pretty good. Cuitadella (the name of the city we were in–opposite side of the island from the airport city named Mahón) had a lot to offer and was very safe. It was so much fun wandering around the city with the other students.

Since we were getting up so early to go to the field we ate breakfast really early (6AM) and then ate lunch at 11AM so when we got back to the residence at 4PM we were STARVING for dinner at 4:30. We would eat and eat and eat (we had a lady who would cook us fresh meals every day!) but by the time 8PM rolled around, we were hungry again. The whole crew decided that we were going to start Fourth Meal. This consisted of sangria (clearly) and tapas along with my prized gelato. It was a great way to get out to the city and try EVERY restaurant’s sangria. Yum!

The days in the field were pretty long. We got up before the sun came up and drove this super old rickety van 35 minutes to the site. We would dig for a bit, eat some lunch, and continue digging. Or at least that was the plan. It was late September, which is apparently rainy season in the Mediterranean. As you can imagine, freshly exposed 1700 year old bones don’t mix well with rain. So our days consisted of some digging in the morning and then a drive back to the city where our “lab” was and we meticulously cleaned bones and catalogued them. I got the fun task of piecing back together a skull! I named it Bobby, since it was undetermined whether it was a male or female.

I was most interested in the teeth. I was fascinated by them. Teeth look exactly the same as they did when the person was alive. It really sank in that what I was holding in my hand was once a human life. And a soldier in the Holy Roman Army at that! Simply thinking about the difference of life between this person and myself was astounding. Would they ever have thought some students, 1700 years later would be digging them back up for advancements in science and knowledge!

I think the most interesting aspect of this dig was the grave I was working on. As you can see in that photo, the bones were an absolute disaster. We found single vertebrae scattered about, a femur next to a clavicle, and a jaw bone near some rib bones. I’m telling you, that grave was a hot mess. The other two that our session was working on were perfectly placed–head, shoulders, knees, and toes all in a row. Skulls almost fully intact and even a few remnants of jewelry were found! Mine? A hodgepodge of who knows what. We were always surprised at what we were going to find next. This, our teachers thought, meant that the grave was robbed–most likely in antiquity. This was a burial site, so the fact that this particular grave was robbed but the ones next to them were left alone is very curious. I guess we’ll never figure out what the ancients wanted with this poor person (or possibly persons, there were many more bones to be found, even within the wall surrounding the area) and what they could’ve found in their grave.

Oh also, how could I forget to mention my favorite encounter of the whole experience! KITTIES!!! There were two barn cats (the laboratory was located near a farm with kitties and horses) who may have been taken away from their mama too soon. They technically belonged to the neighbors of the laboratory, but since they were barn cats, they kind of let them be on their own all the time. So we fed them and took care of them :). They were the CUTEST!!! We named them, but I can’t remember what the names were…On the last day of the trip, one kitty came in in the morning and was injured! I was so sad, I played cat mom all day and held her and pet her. The next day they took her to the vet and all was well 🙂 Here is a picture of the babies!! I’m such a cat lady…they were my world! 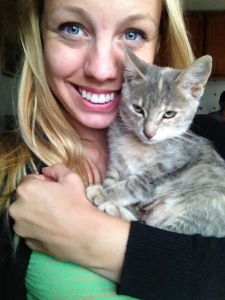 I would say that the overall experience was something I needed. At the very least, getting out of my comfort zone and making new friends in a foreign land was character building. I was incredibly uncomfortable showing up to Menorca almost to the point of feeling nauseous. I want to completely fall head over heels in love with what I do for a living. I want to be passionate about the cause and I want to work extremely hard to get an even better position in life. I want to be fully consumed and excited about my career and this experience didn’t give me that feeling. As for the archaeology itself, I am always interested in what archaeologists are finding and working on, however I don’t know if it’s the correct career for me. I have so much respect for the work archaeologists do for society to learn and grow as a human race. I look forward to seeing what else can be exposed and taught from the depths of our Earth, however I’m not so certain that I want to make that my career.

I guess this post ending is rather confusing and anticlimactic, however that exactly describes my current career position. I guess I’ll just continue to strive for what makes me excited, and eventually everything will just work out! At least that’s what we can hope for, right? 🙂 Here are a few more pictures from the journey. Enjoy!

This site uses Akismet to reduce spam. Learn how your comment data is processed.

Two sisters traveling the world and telling people about it! View all posts by Wander Sisters